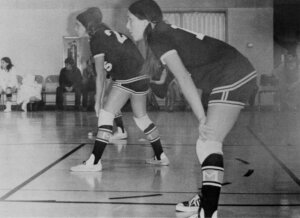 This upcoming June will mark the 50th anniversary of the passage of Title IX, the federal law that prohibits denial of benefits to, exclusion of or discrimination against people in educational programs on the basis of sex. Since 1972, the law has become well-known for the role it has played in the creation and enhancement of opportunities for female athletes at the high school and collegiate levels.

Marian itself was already an institution with a unique mission to provide opportunities for young women at that time. Those who were part of the Marian community then say the school and its students still benefitted from this legal and cultural shift as much as any other.

“We didn’t have athletics at all, and I was certainly frustrated with that,” President Mary Higgins ’69 says. “Relative to Marian, the only way you could earn a trophy at Marian was through debate or Field Day… and we weren’t alone, that’s how it was across the board.”

Before Title IX’s passage, the Nebraska School Activities Association (NSAA) didn’t sanction any high school girls’ sports. Summer leagues and teams assembled in Catholic Youth Organizations (CYOs) were options open to female students, but Connie Cavel ’68 maintains that the lack of an official structure made it more difficult for Marian students to achieve at the heights they could have. 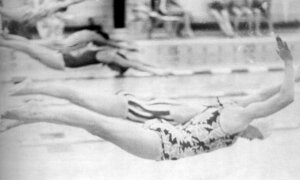 “I can’t say necessarily that I felt deprived, but it wasn’t organized then like it is now,” Cavel says. “If the golf team was going to go play in a tournament, and they needed somebody to fill in, they’d come into my classroom and ask me to play that day. And then of course I’d have to call my mom and she’d have to bring my clubs up to school. That’s how loose and unorganized things were for girls when I was a student at Marian.”

Cavel says this inequity was also a reflection of a larger culture surrounding girls’ participation in activities thought at that time to be “for boys,” which she experienced the effects of firsthand in elementary school.

“During recess, my friend and I would go play baseball with the boys because we loved baseball,” Cavel says. “We got in trouble for it. We had to wash dishes for the nuns in the convent for two weeks… it was just kind of frowned upon: girls played different things than the boys did.” 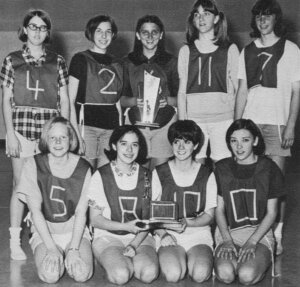 “In the old gym at Creighton, women could go in on Wednesday nights or Sunday afternoons for a couple of hours,” Higgins says. “That was it. Otherwise, it was totally reserved for men.”

After Title IX was passed, changes that gave female athletes more opportunities began to be implemented at the state level. State tournaments were held for sanctioned girls’ sports, equal amounts of federal assistance dollars were to be spent on programs for women and men, and a set of procedures for reporting and fairly resolving instances of discrimination was put in place.

“Title IX had passed in 1972, but it hadn’t really reached Nebraska,” Higgins says. “It was just sort of out there. We were a long way from really incorporating the other gender.”

“Title IX wasn’t a hard date where all of a sudden everything changed,” Athletic Director Rochelle Rohlfs says. “It certainly was a big game-changer in awareness, but the breadth of the impact developed over time.”

Like Marian students today, Rohlfs attended high school after Title IX’s passage. Though she was still aware of many shortcomings of opportunity for girls’ athletics in junior high and high school, she also saw dramatic improvements throughout her education.

“I would say in collegiate sports, honestly I didn’t really notice a difference [between women’s and men’s sports],” Rohlfs says. “Title IX by then had really changed the arena for female athletes. We had the same access to equipment, locker rooms, uniforms, transportation, all those things by the time the 80s hit… I think that kind of support is what allowed me to be a student athlete.”

Higgins discusses the evolution of Title IX’s impact similarly to Rohlfs, having seen its effects firsthand in a lifelong career in education and athletics. 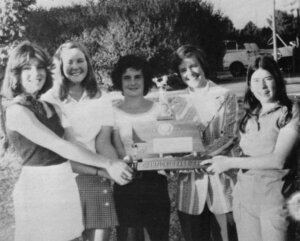 “Title IX paralleled what girls and women were thinking, and it was the spark that said now legally, you have to do it,” Higgins says. “It’s kind of like, in a way, women getting the right to vote. That didn’t just pop out of the ground one day because it was the right thing to do. That was a fight. There was a struggle, there was a lot of pushback, and not everybody supported it. It was the same thing with women’s athletics.”

“Those first student athletes put in a lot of work,” Cavel says. “They led in terms of sportsmanship, what it meant to win gracefully and lose gracefully, but still strove for excellence. They set a standard across the board… I don’t know if they could see the future as it is today, but I think they hoped it could be what it is and maybe even better.”

Higgins is also grateful to her fellow students, teachers, coaches and administrators who worked to ensure Title IX’s passage and the fulfillment of its goals.

“I’m just so glad there were people back then who made [Title IX] a priority and spurred it on, so it didn’t take another ten years for it to come into being,” Higgins says. “I’m glad we’re not talking about the 30-year anniversary of Title IX. It’s 50 years, and that time has done a lot for respect for women, for opportunities for women.”

Rohlfs hopes that Marian can continue to educate its students about the importance of Title IX and the significant role it and athletics play in fulfilling Marian’s mission, long after this anniversary year has come and gone.

“I think it’s our duty to remind the girls of how fortunate they are,” Rohlfs says. “That’s part of our mission at Marian, to empower our girls, and I think athletics is a natural platform for that.”