After months of preparation, 20 students gathered at Eppley Airfield filled with nervous excitement ready to take off on route to Boston for Harvard Model Congress. After a virtual year in 2020, Harvard Model Congress (HMC) started back up again in person this year. Sophomores, juniors and seniors were able to sign up for this experience that replicates our federal government.

Harvard Model Congress creates a space for young people to see how the government works and the role it plays in our lives. Students are all assigned a politician that they represent throughout the conference and aim to pass legislation based on their role’s beliefs. There are different committees that students are assigned to, whether that be in the House of Representatives, the Senate or a special program such as the Presidential Cabinet. 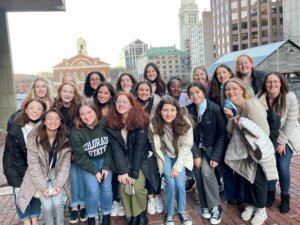 Mrs. Katy Salzman and Ms. Susie Sisson chaperoned and organized the trip this year. Sisson started taking girls in 1999 and took a long break after 2007 because of lower student interest. In 2017, Marian started offering the trip again and students have been going each year ever since. “Anytime students can participate in something hands-on it’s a good experience for them,” Sisson said.

The conference also has a competitive aspect to it where students can win gavels based on their work in their respective committee. Seniors Malerie Birkel and Josie Golka each took home awards. Birkel received an honorable mention for her work representing Kenya in the United Nations Security Council. “I worked really hard before and after the conference, so I was excited that my hard work paid off,” Birkel said. Golka represented Senator Ted Cruz of Texas and was awarded best delegate in the Senate Judiciary Committee. “It felt really great to win best delegate because I felt like my ambitions for the future had been validated. I am hoping to go to law school and get into politics one day, and my success, especially representing a senator I disagree with, helped me hone my skills and realized that what I want to do is something that I am good at,” Golka said.

Junior Isi Raczynski attended the conference for the first time this year. “My favorite part was not only all the people I met but also the amazing experience that I had participating in a model government. I felt like I had a voice and it made me want to be able to use it in the future,” Raczynski said.

HMC gives students a platform to use their voices in a way that’s different from inside the classroom. “It’s really important for women’s voices to be heard in politics and this conference let’s young women practice using their voices,” Sisson said.