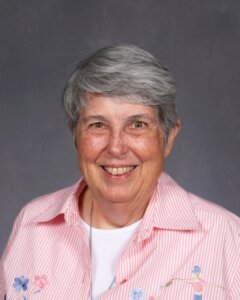 Sr. Peggy Miller, OSM can be found in one of the cubicles in the Advancement Office, since starting at Marian as a temp in 2003. After teaching 32 years, the last 18 being in a computer lab at St. James/Seton Elementary School, she has further developed her computer skills at Marian. Her responsibilities include management of the advancement database.

A graduate of Marian, she entered the Servants of Mary after two years at Creighton University. She received her bachelor’s degree in Math and Secondary Education from the College of Saint Mary in Omaha, her elementary teaching endorsement from Morningside College in Sioux City, IA and her master’s degree from Clarke College in Dubuque, Iowa.