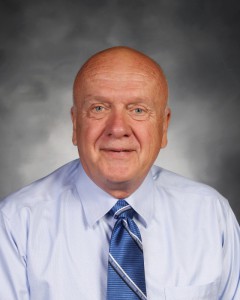 Diving into a frozen lake for Special Olympics, riding elephants in the jungles of Thailand with Marian students and being Frankenstein for the Pops Concert are just a few of the descriptors for Tom Baker.

He was head of the Social Studies Department for many years and holds a bachelor’s degree in Political Science from the University of Nebraska—Omaha and a master’s degree in Liberal Studies from Creighton University. He has taught at Marian High School since 1977.

Baker is an adjunct professor through the University of Nebraska—Omaha, allowing students in Advanced Placement American Government to receive college credit for their course work at Marian. He is a past recipient of the Secondary Teacher of the Year for the Archdiocese of Omaha, Nebraska, Social Studies Educator of the Year for the Second Congressional District, a Toyota Teacher for study in Japan and a Korea Foundation teacher for study in South Korea.