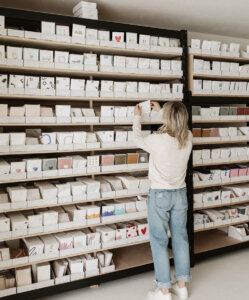 To find out more about Kim Burks and to shop her products, visit www.ramonaandruth.com or Instagram: @ramonaandruth

Marian grads have had many occupations ranging from astronauts to singers to teachers. For Kim Luhrs Burks ‘00, her occupation is a printer and business owner. Burks, the owner and founder of Ramona & Ruth, was inspired to create her own business out of her love for design and stationery. Named after her grandmothers, her business Ramona & Ruth sells cards, notebooks, meal planners and more. However, her business’s success came with early struggles.

The biggest challenge early on was trying to find a tabletop letterpress. These letter presses are antique items and are challenging to find. Once she was able to find a letter press, another challenge arose for Burks: how to use it. After researching online and asking others for help, her business was up and running in 2009.

Burks promotes her business in many creative ways. “Before COVID, I would go to a trade show in New York City every year, called the National Stationery Show,” she said. Burks also started using Facebook ads to promote her products and occasionally at local markets. Her website shows that her products can be found in 19 Nebraska businesses and at nationwide chains like Anthropologie, Barnes & Noble, Paper Source and The Container Store. She also has products in international markets in Australia, Austria, Canada, Ireland, Japan, the Netherlands and Switzerland, just to name a few.

Being an alumna of Marian, some of Burks’ fondest memories are the special traditions that Marian has such as Field Day and Surprise Day, as well as the friendships she made during her time here. As a student, Burks was involved in volleyball, journalism and many other clubs. While discussing her Marian education, Burks said, “Marian really helped me be able to prioritize my work and helped me with time management,” which are both very important skills she uses as a creative business owner.

Her studio is in her home in Northwest Omaha and she has no current plans to open a brick and mortar location. Burks’ advice for students hoping to run their own business in the future is to have slow and steady progress, saying that everything will happen when it is supposed to.