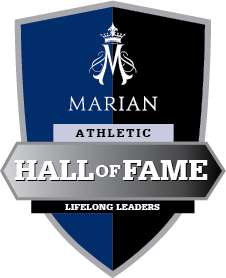 Guidelines for Nomination and Election

Purpose
The purpose of the Marian Athletic Hall of Fame is to recognize and honor those Marian athletes, coaches and supporters who excelled in their respective sports or coaching/support roles and who helped to bring honor, recognition, distinction and excellence to Marian by their conduct both on and off the field or court of competition.  This recognition not only instills a sense of spirit, pride and community, it also serves as a historical account of the great athletic traditions of Marian High School.

Eligibility for Nomination
Athletes are eligible for nomination five years after their class’s graduation. Such athletes must have competed in a NSAA-sanctioned varsity sport and must have excelled in such sport. Among the accomplishments taken into account will be individual (All-Conference, All-State) and team accomplishments, individual school or team records held, and impact on teams and the overall athletic program at Marian during their era, and accomplishments thereafter. Nominations are also open to coaches, who must have participated with distinction and/or made significant contributions to athletics at Marian, as evidenced, for example, by the success of their teams and the acknowledgment of their former student-athletes. Patrons may also be considered for nomination based upon their service and dedication to the athletic programs at Marian.

Nomination Process
A candidate may be nominated for Athletic Hall of Fame membership by any member of the community.  Formal nomination shall be made by sending the nominee’s name and accomplishments to Athletic Director Rochelle Rohlfs at rrohlfs@omahamarian.org.  The nomination form must be received by Jan. 1 of each year. Information relating to a nominee’s career statistics, records, achievements, etc. must be supported by accompanying documentation or sources cited so that the information may be verified. Once presented as an eligible nominee, a candidate who is not elected shall automatically be reconsidered annually until he/she has been considered for five years. Thereafter, re-nomination may occur at any time.