For nearly 40 years, October has marked National Breast Cancer Awareness Month. It is a time annually devoted to education about breast cancer and the importance of early detection and timely, high-quality care. As an all-girls school, Marian held a breast cancer awareness campaign for students in October. Although nearly 95% of all breast cancers in the U.S. occur in women 40 and older, breast cancer is the most common cancer in young adults ages 15 to 39. In fact, several of our younger alumnae have been impacted by breast cancer.

Jenny Reynolds Hare ’94 was 34 years old and the mother to three young children when she was diagnosed. She found a lump but assured herself that she was too young to have breast cancer. After an ultrasound and mammogram, she was told to keep an eye on it. Not long after, the lump doubled in size and she discovered another lump in her armpit. Jenny returned to the doctor. Her mammogram had changed – she had three tumors in her breast. Tests and appointments were lined up quickly – her biopsy confirmed cancer. Jenny had stage 3 cancer.Ten days later Jenny had a bilateral mastectomy, removing both breasts and 13 lymph nodes. It’s been a difficult journey – 13 surgeries, chemo, 33 radiation treatments, multiple infections, and lots of complications from the surgeries.

“At the time my youngest son was three. I had a five-year-old son who wasn’t yet in kindergarten, and a seven-year-old daughter in first grade. How am I gonna’ have cancer with three little kids at home? It took a couple days for it to really settle in… what we were dealing with, the magnitude of that, “ Jenny recalled.

Because Jenny’s husband was self-employed, he was unable to take time off of work, but family and friends stepped up to help with every need. For the first six weeks after surgery, somebody was at the house every day. “Five of my friends and my sister came over, and they organized a list of signups for laundry, meals, cleaning and childcare. I had people that would just come pick up my laundry and bring it back to us. I had people who would come to my home and just stay until lunch and then another shift would come and stay until my husband got home from work, and they’d play with my kids…I was overwhelmed with gratitude because …I was dealing with the emotional side of, ‘Am I even going to make it through this?’ Let alone, “How am I going to do laundry?’”

Jenny’s surgery and treatments pushed her physical and emotional limits. She was exhausted by the chemotherapy and couldn’t bear weight while her incisions were healing. “My kids couldn’t hug me. I couldn’t lift them, put them into bed or tuck them in. There were so many things I couldn’t do, but my kids, oh my gosh, my kids developed so much character during that time, because they were so gentle with me…. And my husband was an amazing support. 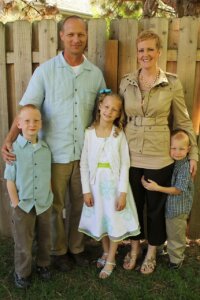 The healing process took about two-and-a-half years from start to finish due to continued complications with infections and the reconstruction process. Through all the trials, Jenny’s faith persevered. “We would pray and depend upon the Lord. I don’t know what I would do without my faith to get me through that,” said Jenny. 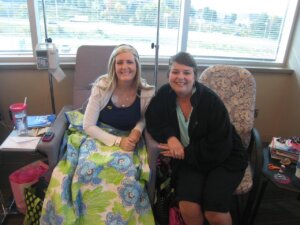 Today Jenny is healthy despite some long-term effects of her treatment. She’s in a place where she can support and encourage other women. Some of those women have been her Marian classmates. She and Brea Douglas Nelson ’94 shared the same doctors; they had several treatments together and became a big support for each other.

“I got to see Brea finish her treatments as I was starting mine. Since then, we have been able to support all the other women in our class who have gone after us with their diagnosis. And it’s quite an astonishing number actually. I think that we’re up to eight in our class,” said Jenny.

With this month being breast cancer awareness month, it brings back a lot of memories for Jenny. Now when she looks back, she says; “Thank you God, for getting us through that. And we did it. Yeah. We made it. “

After graduating from Marian, Jenny studied elementary education and art education at Northwest Missouri State University. She taught fourth grade for several years before becoming a full-time, stay-at-home mom. Thirteen years ago, she began offering summer art camps out of her basement. This blossomed into a full-time teaching studio, Heart and Soul Art Studio. Jenny and her husband, Tim, have three children Kate, 18, Andrew, 16, and Josh, 14.