This year with the addition of girls’ wrestling as a NSAA sanctioned sport, Marian established its first-ever wrestling team and began building its program from the ground up.

In April, girls’ wrestling became an officially sanctioned winter sport in Nebraska. “The Nebraska Schools Activities Association has a multi-tier process in place to sanction a new high school sport,” Athletic Director Rochelle Rohlfs said. For several years, girls from schools across the state have been competing with and against boys. A proposal was submitted from a few of those schools with girl wrestlers. For a sport to become sanctioned, schools in the state vote and final approval is given by the NSAA board. 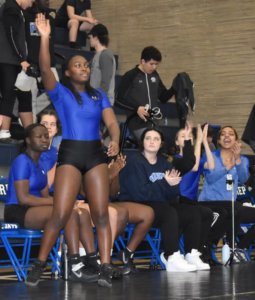 Once approved, Rohlfs began building the wrestling program at Marian. She surveyed students and determined there were about 20 girls interested. She then set about finding a coach and recruited Strength Coach Lauren Barefoot.

The team now consists of 16 hard-working, determined girls. “The girls are looking amazing! Their passion and hunger to learn as much as they can about a completely new sport is absolutely incredible to watch,” Barefoot said.

Pre-season practices began in August with a focus on conditioning and training in small groups on the mats. “We did a lot of strength in the weight room, then for cardio we generally will either sprint the stairs for 2 minutes and take 30 second rests because that mirrors our matches, or we will run the soccer field goal to goal a couple of times,” Percy Prochaska ‘23 said.

The team has formed strong connections and encourages each other no matter the circumstance. “The environment is amazing! I love that we all support each other. We cheer each other on even for the little things,” Prochaska said. The team members are looking forward to their first season as they continue to improve.