Jana Belits Rhodes ’91 began dancing when she was only 3 years old. Her love of dance began at a Kitty Lee Dance Studio and by the time she was a senior at Marian, Rhodes received a dance scholarship to Oklahoma City University.

Before attending college, Rhodes loved and cherished her time at Marian. Growing up, she always wanted to be a dancer and Marian nourished her love for dance. 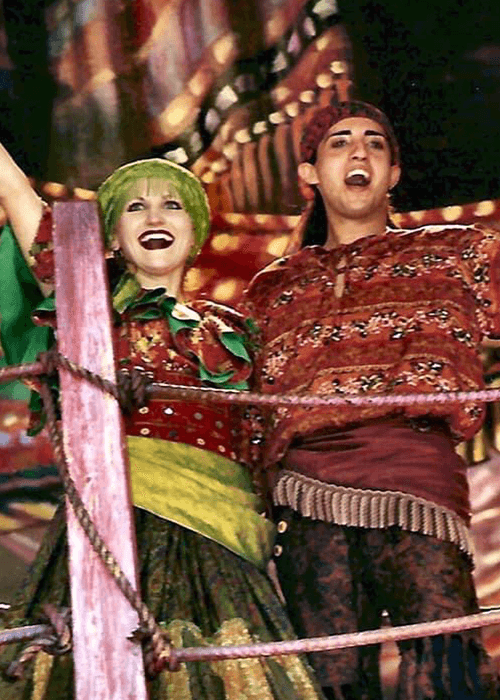 One of her favorite memories at Marian was being on the cheer committee for Field Day. All of the cheerleaders were poodles for their theme “Senior Circus.” Rhodes is still close with all nine of her best friends from Marian and enjoyed all four years of high school.

Rhodes attended Oklahoma City University and received a Bachelors of Performing Arts with an emphasis in dance. After spending four years in Oklahoma, she moved to Virginia where she met her future husband, Ryan.

She got a job as a dancer performing at Busch Gardens, an amusement park in Williamsburg Virginia. After, Rhodes began working on a 14-day cruise ship line called “The Premier.” She spent seven days traveling around the Eastern Caribbean and seven days traveling around the Western Caribbean. She worked as a dancer and traveled to St. Martin, St. Lucia, St. Thomas, Honduras and the Dominican Republic

“Performing in the shows was my favorite part of the cruise,” Rhodes said.

In the summer of ’98, after getting married, Rhodes and her husband moved to Florida. She auditioned for a job at Disney World and became a dancer performing in the Hunchback of Notre Dame in Hollywood Studios. Soon after, she became a staging specialist, where she taught the choreography to all the castmates. Most of her job was backstage behind the scenes, rather than actually performing. During Christmas time, Magic Kingdom would have their “Castle Christmas Show.”

Rhodes was in charge of teaching the choreography to all of the dancers and cast members involved in the performance.

“It was exhilarating, exciting and terrifying to be in charge and choreograph 250 dancers for a 25 minute show. My job was always magical because I got to see the reactions of kids when they see their favorite Disney characters for the first time,” Rhodes said.

Rhodes had two kids within her nine years of living in Florida. In 2007, she and her family moved back to Omaha where she had her third child. She was a stay-at-home mom until all three of her kids were in school full time.

“I have gone full circle, as I am teaching at the same studio that I went to while growing up,” Rhodes said.

Rhodes is currently going back to school to get her Masters Degree in Elementary Education.

Although dance was always what she wanted to do when she grew up, Rhodes is most proud of her kids and seeing their bright futures ahead of them.

She is happy to see her Catholic faith and morals within her children that she was taught at Marian. She is very devoted to raising her children and being a positive role model for them.
“I was able to fulfill every dream I had with performing and I am very grateful for that,” Rhodes said.