As a timid, unsure freshman walking into the halls of Marian in 1996, she did not realize just how much her life would change in the next four years.

Nearly 24 years later, Jen Cimino ‘00 lives the changed life she couldn’t have even imagined as a freshman. She has always been interested in drama and theater, but it wasn’t until she attended and graduated from Marian that she actually became comfortable with performing. The performer in her has become a music teacher and a nonprofit organizer. 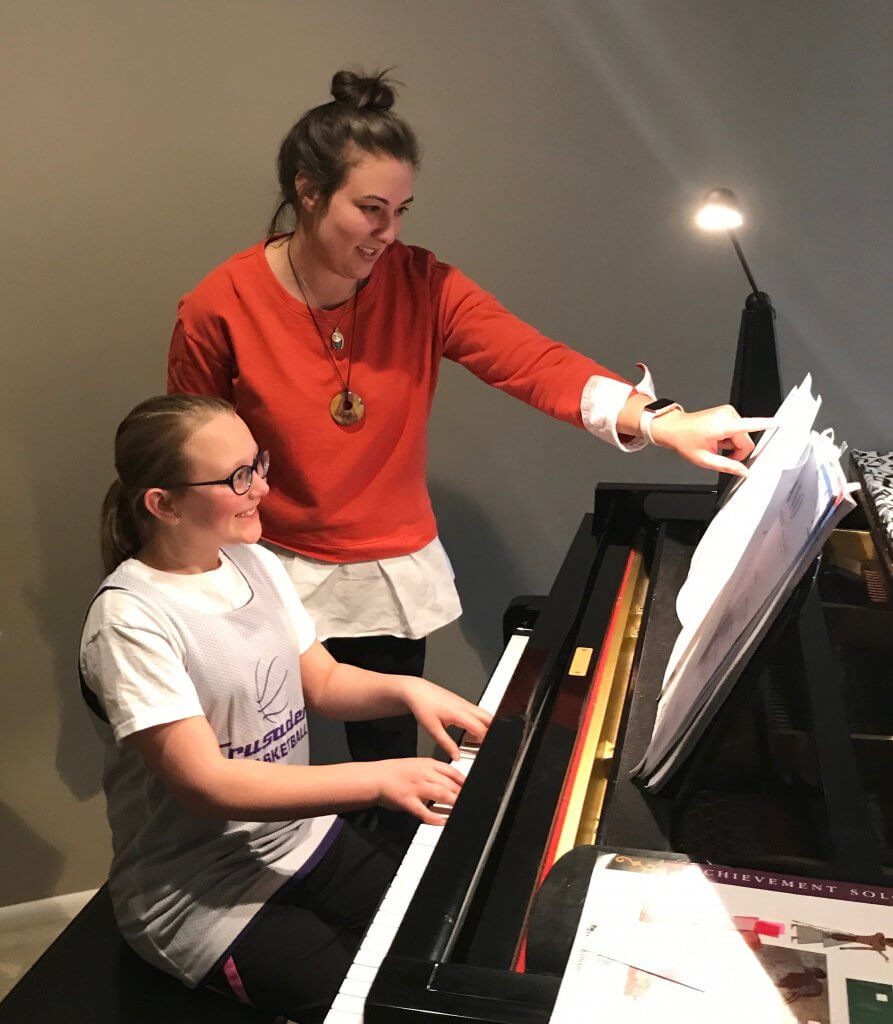 At Marian, Cimino felt her community was just right for her. “Being able to go to a school that was just girls helped build my confidence,” she said. “By the time I graduated, I was totally comfortable actually getting up in front of people and trying new things.” This helped her to participate in Marian’s musicals and choir as she went on to swim in the state swim meet, but this was only the beginning of her performance career.

After attending Marian, Cimino went on to get a theater and music degree at Santa Clara University in California and afterwards a Masters of Sacred Music at the University of Notre Dame. Following her academic life, Cimino became a drama teacher in Boston, MA.

But a career in Boston wasn’t enough for Cimino. After living on the east coast, she moved back to her home in Nebraska and is currently living her life as a piano and voice teacher, owning her own business, Miss Jen       Music   Instruction. She said that teaching in this way helps her to make a difference in her community by “enhancing people’s skills.” She hopes to give her students a sort of confidence and comfort in their music or drama lives.

Cimino doesn’t only spread positivity and make a difference as a music teacher, but also is the founder and director of the nonprofit organization, On Cue. As she mentions, “our goal is to provide performing arts opportunities to kids who have no access to theater classes.” The organization travels to different schools and helps middle school students put on a musical that they never had the chance to create.

The students fortunate enough to be helped by this organization are taught how to use preparation for the musical as life skills. They are taught, as Cimino says, what their responsibility to the team is, how they have confidence when they’re on stage, what their body language says about them, what it means to be prepared for class or to have a responsibility for their lines, and much more.

Not only does Cimino make a difference in her career, but her career makes a difference in her. She says that if it weren’t for her opportunities in teaching, she would have a harder time with patience and preparation. She says, “If you’re not ready to teach the lesson, you’re in trouble. Patience and being prepared are necessary to being a teacher.”

In order to teach those classes of children, Cimino remembers relying on a specific Marian aspect to help manage groups. “Field Day helped me to learn how to organize and manage large groups of people,” she said.  Marian helped her in her high school years to direct the demonstration crew at Field Day and helps her now to direct her classroom.

One of Marian’s main goals is to help their students to succeed and become confident, hard working women of society who do their best to make a difference in their community. Cimino does just that because of Marian, believing that, “putting [success] into the brains of young people is powerful and helps them achieve success.”