Kellyn Daly ’16: An athlete and a survivor 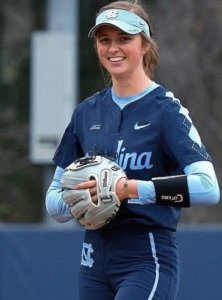 By Lany Gregor ‘22 with contributions from Courtney Kilroy ‘18

From the day she was born, Kellyn Daly ‘16  had Marian in her genes. Her mother Lisa Shannon Daly ‘82 and both of her aunts attended Marian, as well as five of her cousins. “It was never a question,” Daly said.

Very early in life, softball became important to Kellyn, and at 5 years old she joined her first real softball team. Coming into Marian, she quickly made an impact on the team as a talented pitcher. As a freshman she played on both the junior varsity and varsity teams. After hard work on and off season, she led Marian to a state championship her senior year in 2015, giving Marian softball their first softball state championship.

Kellyn said she loved her time at Marian and enjoyed that everyone is allowed to be girls, “there’s no pressure, you can be who you are,” Daly said. She also added that her experiences at Marian made her better at forming other relationships with friends in the future.

After graduating from Marian, she was recruited to  the University of North Carolina. She always knew she wanted to get out of the Midwest and always liked UNC because of the College World Series, but she never saw it as an option until their coach reached out to her about playing there. She was then able to visit, and when she did, “it just felt right,” Daly said, and she became a Tar Heel.

Daly played at UNC for two and a half years before having to medically retire due to an elbow injury. She served as a manager for the remainder of the season to stay connected with the sport. The next year, as she was on track to graduate, she was diagnosed with breast cancer. Kellyn found the lump herself and mentioned it at one of her regular check ups; her doctor then sent her to a radiologist to look at it.

Kellyn was diagnosed with Secretory Carcinoma, a type of breast cancer, in August of her senior year, at age 22. She underwent two surgeries, the first being at the beginning of August 2019 and the second at the end of August. After surgery she was put on an estrogen inhibiting medication that she will take for five years. After her diagnosis, she made the difficult decision to take that semester off, putting her behind the rest of her class. She returned to school the following semester and picked up right where she left off.

Initially, Kellyn studied English with plans to become a publisher, but those plans quickly changed. She graduated with a major in communications and a minor in studio arts in December of 2020. “I ended up branching out from there and taking a pretty wide array of courses,” Daly said. Her biggest accomplishment in life is graduating from college, because she worked very hard to get it done.

Kellyn is now planning a career in social work and will be applying to programs this fall and winter to start next August. “I am incredibly passionate about helping others. Having the opportunity to branch out of the Midwest for college was a truly wonderful experience for me, as I got to learn so much about people from different walks of life than me, and it inspired me to want to spend my life bettering the lives of others,” said Daly.