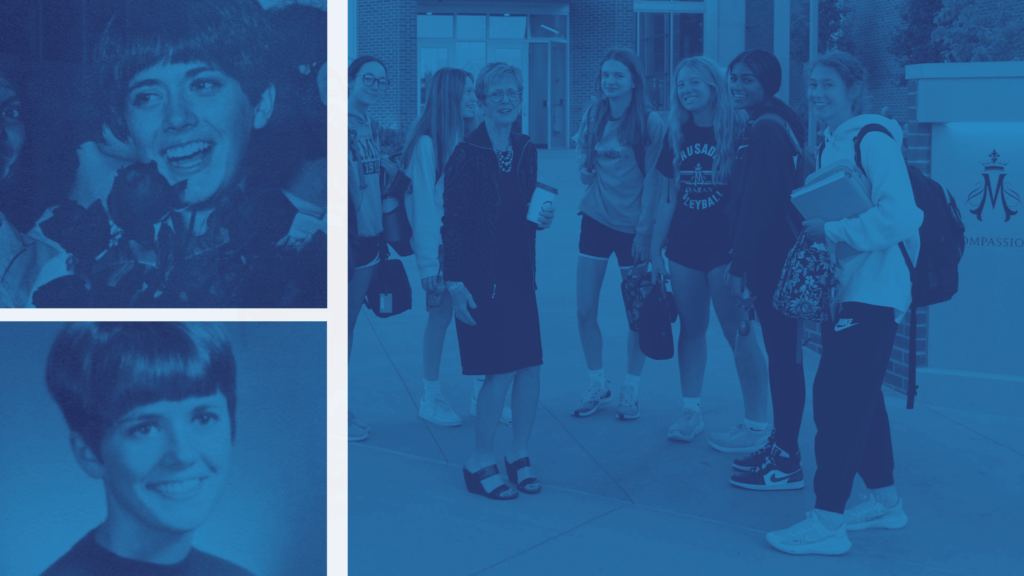 by Nick Schinker | Reprinted with permission of New Horizons, a publication of the Eastern Nebraska Office on Aging.

If all the high school girls, collegiate women athletes, and adult women who benefitted from the vision, determination, and leadership of Mary Higgins were to give her an ovation, the applause would be deafening.

As an undergraduate at Creighton University in 1973, her drive and desire sparked the creation of the school’s softball team, which paved the way for other women’s sports and served to launch the Creighton women’s athletic program. Not long after graduating from C.U., Mary became Creighton’s Division I softball coach and led the teams for 17 years, guiding several into the national rankings and the Women’s College World Series. She earned many accolades including her induction as the first woman into the Creighton Athletic Hall of Fame.

After retiring from coaching in 1992, she served as Assistant Athletic Director, and then joined Creighton’s administration team as Assistant Vice Provost for Student Retention and Pre-Major Advising, where she coached students toward successful career paths.

In 2014, she left Creighton and returned to her high school alma mater, Marian High School, to become the first alumna in the school’s 59-year-history to be named president. A veteran of the school’s alumnae Board and its board of directors, as president she has overseen fundraising for several major projects, including the current upgrade of – no real surprise – Marian’s athletic fields and facilities.

First, there is one more accolade heading her way. The evening of Dec. 10, Higgins was inducted into the National Fastpitch Coaches Association (NFCA) Hall of Fame, the most prestigious award given by the NFCA, during its national convention in Las Vegas. It is an honor that is both fitting and well-earned.

“Mary Higgins was Creighton University for 45 years – from the day she entered as a student in 1969 to the day she retired from the university entirely in 2014,” Galles wrote. “She was and is a servant leader who dedicated herself to Creighton and her Lady Jay Family.”

Retirement or not, Higgins says, she will always love Creighton and Marian. If Mary Higgins was an animal, she’d likely be a bluejay. Her late father, Gene Higgins, was a Creighton graduate who worked in marketing and communications at Mutual/United of Omaha his entire career. Her mother, Dottie, 94, attended Creighton and remains a Creighton fan.

Higgins’ husband, Patrick Kennison, is a Creighton Prep grad. They met when Mary was a freshman at Creighton University, and he was a junior. “I was going out with his best friend, who dumped me,” she recalls. “We started talking, and we kept talking for years.” They will celebrate their 43rd anniversary this year.

They have two children, David “Dewey” Kennison, a graduate of Creighton University’s School of Law who is a partner at Baird Holm, LLP; and Julie Schaefer, M.D., a Marian and C.U. alumna as well as a graduate of the Creighton School of Medicine.

Believe it or not, both also met their future spouses at Creighton. They have produced a total of four granddaughters – Annie, 4 and Nora, 2, in Minnesota with Julie and her husband Joe Schaefer; and Margaret, 5, and Kate, 3, with Dewey and his wife, Molly Millea, in Omaha – all quite possibly destined to become Creighton alums.

“Well,” Higgins says, “we are all die-hard Creighton fans.”

Higgins grew up in St. Bernard’s Parish and attended kindergarten at Marian, back when it was offered until the school needed more space for the high school. In eighth grade, she moved when her family built a home in the Keystone area.

Prior to the passage of Title IX in 1972 (which prohibits the exclusion on the basis of sex of any person from participation in, the benefits of, or discrimination under any education program or activity receiving federal financial assistance) there were no organized sports for girls or women through the American school system.

She kept that love of softball into her college years, when at Creighton University as a resident advisor her senior year she noticed many students who happened to bring ball gloves with them to school, yet the college had no team.

“I went to the athletic administration to see if they would start a softball program,” she recalls. “Dan Offenburger was the athletic director, and fortunately, he had three daughters, so he listened.”

The answer was yes, and he put Higgins in charge. “He told me to go out and get uniforms, equipment, and put a schedule together,” she says. She then convinced Offenburger to be the coach. Mary was the Jays’ catcher.

It wasn’t a fancy program. The schedule was patched together by calling other schools. The players were driven to away games occasionally by Tom Apke and other Creighton basketball coaches.

“Softball was the first women’s sport sponsored by Creighton University post Title IX,” Higgins says. “After softball came volleyball, basketball, track, swimming – a whole slate of women’s sports.”            She says Offenburger was an inspiration to her. “He was not forced to start women’s sports,” she says. “He wasn’t sued. He knew it was the right thing to do. I am forever grateful for his mentorship.”

Higgins earned her bachelor’s degree at Creighton in American studies and a physical education teaching certificate, K-12. While she was working on her master’s in physical education at the University of Nebraska at Omaha, Offenburger asked her to coach the Creighton softball team.

Creighton University hosted the first six NCAA softball championships (1982 to ‘87) with Higgins as the tournament director. The Lady Jays twice qualified for the NCAA Women’s College World Series, finishing as high as fifth nationally in 1986.

After 17 years, and with a record of 564-298, Higgins decided to retire from coaching. “We had two young children at the time,” she says. “There was no player database back then. To recruit, I had to travel. I was at tournaments every weekend, sitting in the bleachers. I’d watch the players and then go talk to the coaches. I kept track of everything in a notebook full of file cards.

“It was hard to be out of town nearly every summer weekend, and I wanted more time to be with my kids.”

That was 1992. She stayed at Creighton, serving as Assistant Athletic Director and then as Assistant Vice Provost for Student Retention and Pre-Major Advising, until 2014, when she left to return to Marian as its president. Where she had plenty of work ahead of her.

Higgins was president of the Marian Alumnae Board from 2012 to 2014 and served on the Marian Board of Directors from 2005 to 2011, leading several committees and serving as board chair. She and her husband co-chaired MarianFEST in 2005. As president, Higgins is responsible for external affairs including fundraising, recruitment, and alumnae.

She is very good at every aspect of her job.   She raised $9.2 million for a major building renovation and the Haddix Academic Center addition that transformed the look and feel of the school. In announcing the 2019 dedication, the school said the project “included a new main entrance, a secure, welcoming lobby; an airy, comfortable academic center; and an intimate chapel accented with symbolic stained-glass windows. A cafeteria upgrade provided for quicker service and a better menu.”

In addition to raising money for the renovation, donors provided another $3 million for the school’s endowment. The current $6 million project will improve the school’s outdoor sports facilities and include an artificial turf soccer field and a new track, improvements Higgins says are long overdue.

“These facilities have not been touched since they were built,” she says.

Throughout a career that truly began when she was a college student, Higgins has overcome many challenges and logged many accomplishments, giving others credit when due. “I am proud of what we did at Creighton, and what we’ve done at Marian,” she says. “I was there for the start of women’s athletics, but I have seen so many C.U. coaches and student-athletes build on that and do great things.”

Beyond following Creighton sports, Higgins is a “bogey golfer” who practices yoga and exercises every day. In retirement, most of all she is looking forward to having more personal time. “My heart aches to be more available to my granddaughters at their young ages,” she says.

As for the Hall of Fame induction ceremony in Las Vegas, Higgins won’t be there. Not with the risk of COVID-19 and all its variants. But, if she steps outside her home in Omaha that night at just the right time, one thing is certain. She’ll hear the applause.