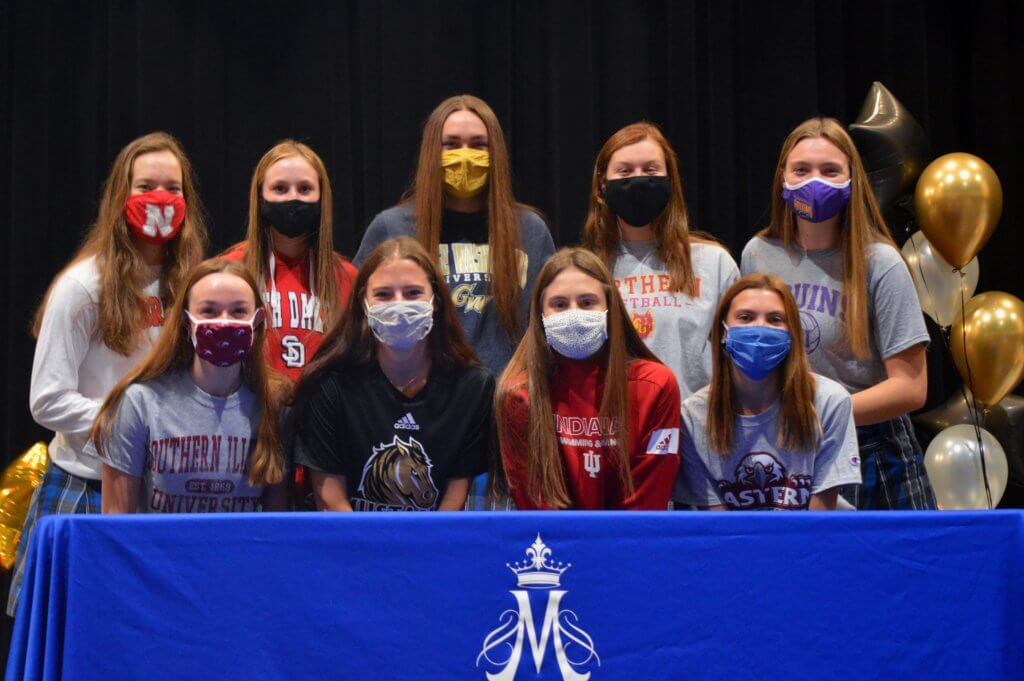 Marian High School is proud to announce that nine Crusader student-athletes signed letters of intent at a recognition ceremony held Nov. 11. Along with those signing to play college athletics, Marian is also recognized NSAA Believers and Achievers award winner, Eva Watson ’21, and the Nebraska Coaches Association Coach of the Year, Marian Swim Coach BJ Christensen. While these athletes and coach have displayed stellar performances on the court and in the pool, their time spent in the classroom and community is just as impressive.

Megan Carter ’21 will join the diving program at Indiana University. Megan is the daughter of Becki and JF Carter. Megan is a two-time Metro Conference champion, a three-time State champion, and set the 2020 Metro Conference diving record. She also placed third in the 1 and 3 meter at the 2018 World Junior Championship. Megan was named a High School All American in 2018, 2019, 2020. Outside of the pool, she is a member of Marian’s Science National Honor Society and a volunteer at the Munroe Meyer Institute at UNMC.

MC Daubendiek ’21 is signing to play volleyball at George Washington University. MC is the daughter of Kay and Jim Daubendiek and plans to study political science. MC has lettered three times in both volleyball and track and field in her time at Marian, and was ranked the #1 Nebraska Right-side of the class of 2021 by PrepDig. She is a member of Art Club, Young Democrats and Girls for Girls Club. She’s also a member of National Honor Society, as well as Marian’s science, social studies and math honors societies.

Anna Linne Kidder ’21 is signing to play soccer at Eastern University. Anna is the daughter of Mark and Tarna Kidder, and plans to study political science on a pre-law track. Anna has been a member of the 2017 and 2021 Nebraska State Cup Champion teams. She participates Spanish Club, Art Club and Operation Others at Marian. She is also a member of National Honor Society and the Quill and Scroll National Journalism Honor Society, in addition to the Heartland Family Service Student League.

Jojo Randby ‘21 will be joining the swimming program at the University of Nebraska at Lincoln, where she plans to study on the pre-dental track. Jojo is the daughter of Bill and Julie Randby. Jojo is a six-time NISCA All-American. She holds the school record in the 200 medley relay and 200 freestyle relay and the school and state record in the 100 breaststroke. In 2020, she was named the Most Outstanding Female Swimmer at both the Metro Conference and the State Meet. Jojo is a member of Math Club, Big Sisters and Art Club, as well as multiple honors societies.

Abby Russell ’21 is signing to play softball at the Southwest Minnesota State University. Abby is the daughter of Lori and George Russell and plans to study physical education with an emphasis in sports management. Abby achieved a varsity letter in all four years of her time at Marian. She was named a Class A Player to Watch, the Omaha World-Herald’s Class A Second team in 2018, Honorable Mention in 2019, and Class A First team in 2020. She has also been named this year to the Lincoln Journal Star Super State First team and Class A All-State First Team. Abby is a member of Recruitment Team, French Club and FBLA.

Kaydence Skiles ‘21 is signing to play softball at Northern State University. Kaydence is the daughter of Kathy and Brady Skiles and plans to major in government. She has been named a member of the NSAA Academic All-State team, the Lincoln Journal Star Super State Second Team, and the Lincoln Journal Star Class A All-State Second Team for the past two years. Kaydence is a member of the Servite Connections Club, as well as National Honor Society, the Science National Honor Society, and the Rho Kappa Honor Society.

Sidney Sledge ‘21 is signing to play volleyball at Bellevue University. Sidney is the daughter of Joe and Debbie Sledge. She has played three sports in her time at Marian: volleyball, basketball and soccer. She is a member of National Honor Society and Rho Kappa Honor Society. Sidney has made academic honor roll throughout her Marian academic career, in addition to participating in Spanish Club, French Club, Art Club, Operation Others and Campus Ministry Faith in Action Team.

Rylee Trojan ‘21 is signing to join the swimming program at Southern Illinois University. Rylee is the daughter of Kevin and Lauren Trojan and plans to study on the pre-pharmacy track. She’s been named to the Metro Academic All-State and the Midwestern All-Academic Second Team. Rylee is a member of National Honor Society, Young Medicine Club, Coffee Club and Yoga Club.

Tatum Villotta ’21 is signing to play softball at the University of South Dakota. Tatum is the daughter of Todd and Beth Villotta and plans to study on the pre-pharmacy track. She earned a varsity letter her freshman year and has since been named to the 2018 All Academic First Team, the 2019 Omaha World-Herald All-State First Team and the 2019 Lincoln Journal Star Super State Team. Tatum is a member of French Club, Crusaders Elevating Others and Operation Others, as well as the National Honor Society, and Marian’s French, English and science honor societies. 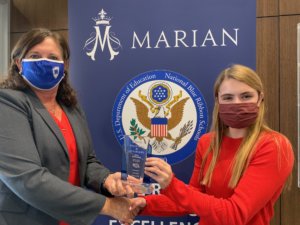 Eva Watson ’21 (pictured here with Marian Athletic Director Rochelle Rohlfs) was awarded a NSAA Believer and Achiever Award, a state-wide program to recognize Nebraska’s future leaders. The award honors students for their excellence in academics, participation in NSAA activities, school and community involvement, and citizenship. Out of hundreds of nominations from all high schools statewide, only 48 high school seniors are honored as 2020-2021 Believers and Achievers. Eva’s Academic honors include a 4.27 GPA; she is an AP Scholar with Distinction an a member of multiple honor rolls and honor societies, She has been recognized four times with cross country academic letters. In addition to cross country, she participates in track, diving, speech, debate, and music. In addition, she belongs to the Math Club, Pro-Life Club, Freshman Retreat team, and Operation Others. Outside of school, she is a volunteer at the Munroe Meyer Institute and the Siena-Francis House, a camp counselor, and a youth swim coach.

The Nebraska Coaches Association selects a head coach in for each sanctioned sport as the Nebraska high school head coach of the year. For the 2019-20 Swimming and Diving season, Marian head coach BJ Christensen was named the Coach of the Year. Coach Christensen led the Crusaders to their 14th state swimming and diving title in 2020. The team headed to state with 30 automatic qualifying times and 26 of those swims advanced to the finals. (At right: Coach BJ Christensen and Athletic Director Rochelle Rohlfs)