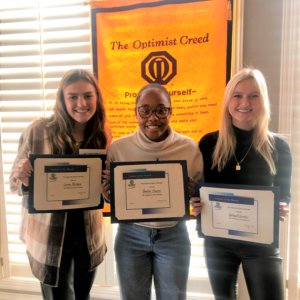 Seniors Lauren Montague, Shantise Pearson and Sydney Schroeder were selected as the October, November and December Optimist Club Students of Month. They were honored Wednesday, Dec. 1, at the Optimist Club of Omaha luncheon and program.

The Optimist Club is committed to promoting and recognizing the good works of area youth. Marian selected Lauren, Shantise and Sydney for the many contributions they share with the Marian community as well as the community at large. Optimist International is a worldwide volunteer organization made up of more than 2,500 local clubs whose members work to make the future brighter by bringing out the best in children in their communities and in themselves.