Annually, students are given the opportunity to serve communities in the Dominican Republic. Beginning at Marian in 2007, this service opportunity is through the Institution for Latin America Concern (ILAC) program at Creighton University, and students stay each night at the ILAC Center in Santiago, DR. The 12-day trip allows them to immerse in a new culture and perform compassionate acts of service in order to benefit the communities.

This previous summer, students built a greenhouse in Angostura, visited an orphanage, played games with local children, spent a day at the beach, visited the village of Manabao in the mountains and toured the capital city of Santo Domingo. “My favorite part was watching the girls be immersed into the generous hospitality and culture rooted within the locals of the Dominican Republic,” said math teacher and chaperone Mrs. Jaime Piernicky.

In preparation for the trip to the DR in 2022, the traveling group of sophomores and juniors meets every few weeks to look over paperwork and itinerary all while getting to know each other in order to bond as they embark on this incredible journey. They have spent time studying the history of the Dominican Republic including the language, political tension and Christopher Columbus and his arrival to Santo Domingo. Spanish teacher Mr. John Paul Franco and teaching assistant Mrs. Karen Coolidge will be traveling with the students this year. “Seeing how the girls work for the common good in the previous DR pictures inspired me to go on this journey,” Coolidge said.

Although Coolidge is not fluent in Spanish, she is not worried about the language barrier. “Even though you don’t speak the same language, there is still a language of love. You can communicate kindness,” Coolidge said. Coolidge has traveled on a service trip to Nicaragua, but neither Coolidge nor Franco have been to the DR.

The eight selected students traveling this year are juniors Campbell Piotrowski, Erika Ramirez-Henriquez, Megan Patterson, Ellen Crotzer, Cecilia Regan and sophomores Grace Sparwasser, Ellie Smith and Madeline Wear. The group is scheduled to leave on May 27 and return on June 7. 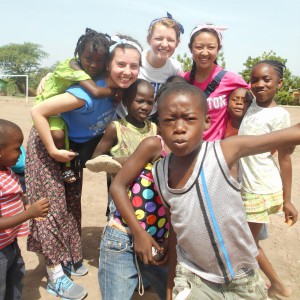 Marian girls have been fortunate to travel to the Dominican Republic for many years. Past students have lived with host families, painted a church and visited orphanages, refugee camps, sugar mills and beaches.

In order to prepare for the DR, the group hosted different ways to raise money for the trip. “The goal is that no student is restrained from going on the trip due to financial constraints,” Campus Minister Deacon Fuller said. Each of the girls were instructed to write at least ten letters explaining the trip and ask for prayers and funding for the trip. The finances earned from the letters went directly towards the individual person who wrote each letter. During Walls Night on April 19, students sold Field Day-themed ice cream sponsored by eCreamery. All of the proceeds made from the ice cream went towards the service trip and was divided evenly among the group members. Additionally, the ice cream was sold at both eCreamery locations on April 21, where a portion of the proceeds went towards the service trip. On April 23, the group hosted a wine and appetizer tasting for parents at Vino Mas in which the money earned will also be used for the service trip.

The group will arrive in Santiago on May 27. The next day, they will have orientation, a tour and will shop in the city. They will also visit a batey and will watch a documentary about Dominican political turmoil. After, they will depart from Santiago and travel to Sabaneta, where they will meet their hosts and will see their work site. This year, the group will work on a greenhouse run by women. They will spend much time engaging with the community and they will have a Celebration of the Word, a Mass, before they travel back to the ILAC Center in Santiago. Their final day in the DR will be a day at the beach while the group enjoys the beautiful scenery.