Marian High School is proud to announce that seven Crusader student-athletes signed letters of intent today. While they have displayed stellar performances on the matt, track, court and field, their time spent in the classroom and community is just as impressive.

Mallory Connealy ‘23 is signing to play soccer at Xavier University in Cincinnati, where she will study pre-law. Mallory is a four-year letterman and was state semi finalist for two years. At the club level, Mallory plays with the Gretna Elite Academy National Soccer Team. She is a member of the National Honor Society and the National Science Honor Society. 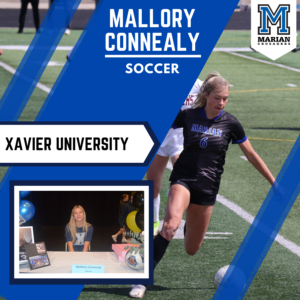 Maddia Groff ‘23 is signing to play softball at Southern Illinois University in Carbondale. She is currently undecided on her major. Maddia has been named 2022 All-Nebraska Super-State First Team captain, Metro Conference captain and player of the year, and First-Team All State Class A. Maddia is a member of Marian CEOs (Crusaders Elevating Others), co-editor of the yearbook, and volunteers with All Play Miracle League for disabled youth. 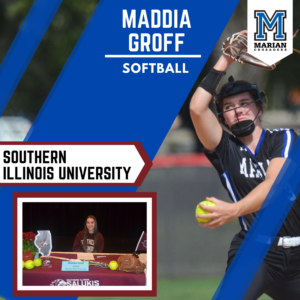 Rylinn Groff ‘23 will also be playing softball at Southern Illinois University in Carbondale and has not yet declared a major. Rylinn is a member of the 2022 All-Nebraska Super-State First Team, First Team All-State Class A, All-Metro First Team and First-Team All Conference. At the club level, she plays with the Nebraska Gold 18U National team. Rylinn is a member of Marian CEOs (Crusaders Elevating Others) and volunteers with All Play Miracle League, helping disabled youth play sports. 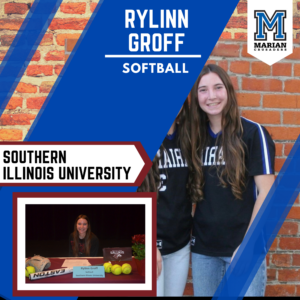 Jocelyn Hood ‘23 will be swimming at the University of Iowa, in Iowa City, and plans to major in exercise science. Jocelyn is a four-time All-American, Omaha Metro Conference Outstanding Swimmer, WOWT Athlete of the Week, and 2022 Metro Academic Scholar. Also a club swimmer, Joselyn is a four-time Midwestern Swimming Swimmer of the Year and 2021 Radiant Spirit Award winner. Jocelyn is a member of the Marian recruitment team and Big Sisters. She also volunteers with Heartland Family Service. 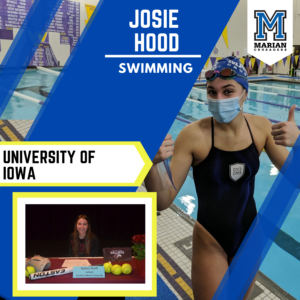 Emma Humpal ‘23 is signing to play softball at Southwest Minnesota State in Marshal, where she plans to study exercise science. Emma has been named to the All-State Second Team and the All-Nebraska Second Team. She is a member of Marian campus ministry, National Honor Society, MU Alpha Theta Math honor society and math club. 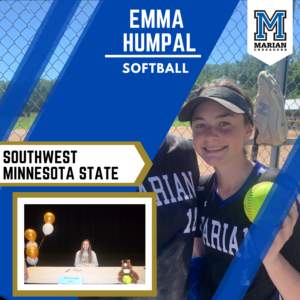 Amanda Loschen ‘23 is signing to play volleyball at the University of South Dakota in Vermillion, where she plans to study medical biology. Amanda has been recognized as a Catholic Voice Athlete of the Month, Greater Omaha Sports Scholar Athlete Nominee, All-State Third Team, All-State Honorable Mention and Lincoln Journal Star All-Academic List. She was named an 2020 AAU National Champion and was a Nebraska Prep 2023 Top 10 Recruit. Amanda is involved in Campus Ministry, Recruitment Team, Crusaders Elevating Others, Young Medicine Club, and National Honors Society. She also plays and coaches at the club level. 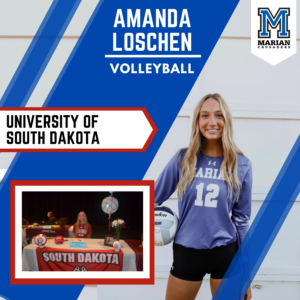 Persephone Prohaska ’23 is signing to wrestle for Hastings College in Hastings, Nebraska, where she plans to study secondary education. Persephone was captain of Marian’s inaugural wrestling team, and went on to become a district champion, placing second at Metros and qualified for Sate. She is also a member of the Nebraska Viper Gold dual team, where she continues to compete against opponents from multiple states. At Marian, Persephone also participates in track and field, leads the sign language club, and is a core team member for Polar Plunge. 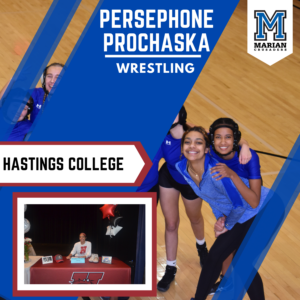