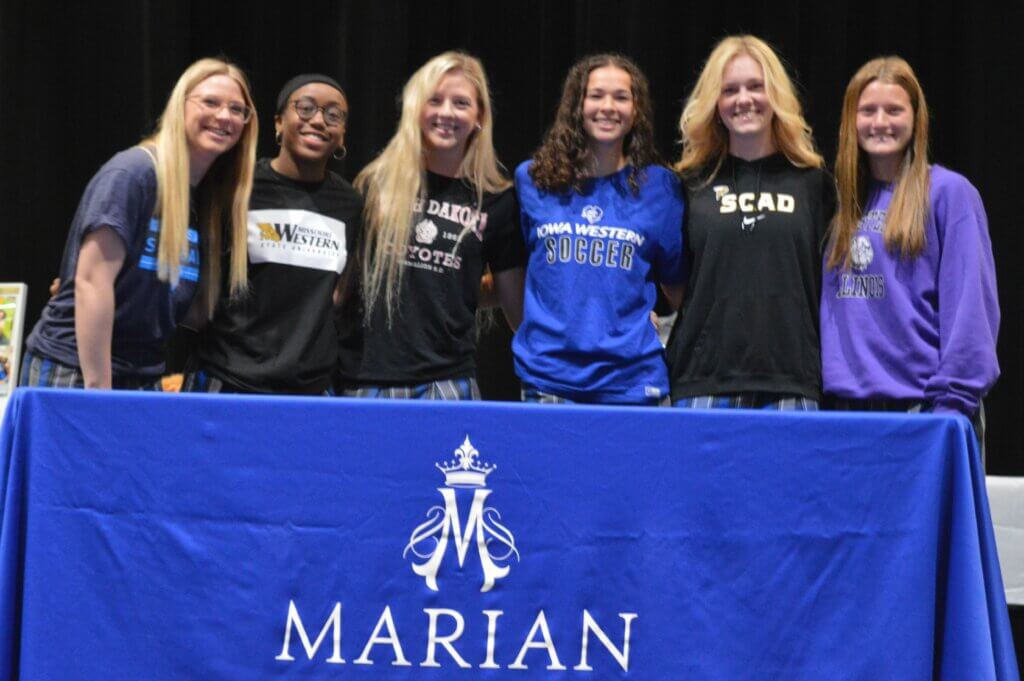 Marian High School is proud to announce that six Crusader student-athletes signed letters of intent at a recognition ceremony held April 12. While they have displayed stellar performances on the track, court and fields, their time spent in the classroom and community is just as impressive.

Abigail Bluvas ’22 is signing to dance at the University of South Dakota, where she plans to study nursing. Abi has been a member of the Marian Dance Team for four years, serving as captain for two years. She has danced competitively with the Dancers Edge for nine years. Abi participates in a number of Marian clubs and activities including Campus Ministry, TARS, Recruitment Team, Young Medicine Club, National Honor Society  and the Dominican Republic Service Trip.

Justyce Cribbs ’22 is signing to run track at Missouri Western University in St. Joseph, Missouri., where she plans to study physical therapy. Justyce has lettered in both basketball and track. She also serves on the core team of IDEAS Club. She has also been involved in Big Sisters and Step Team

Lany Gregor ’22 will be playing softball at Dakota State University in Madison, South Dakota, where she plans to study business management and physical education, while minoring in cyber security. Laney has earned letters in both basketball and softball. She is a member of Marian’s award-winning journalism staff and is the editor-in-chief of the 2022 Marian Year book. Lany has earned recognition for her work in photography, broadcasting and design. She has also participated in Running Club, Students for Life, Recruitment Team and Big Sisters. She has been a basketball team manager for four year.

Olivia Heinert ’22 will be playing soccer at Western Illinois University in Macomb, Illinois. She is currently undecided on her major. Olivia has earned letters in both basketball and soccer. She was Marian Soccer’s 2021 offensive player of the year and received the Golden Boot award. She was recognized by the Lincoln Journal Star as a 2021 all-state honorable mention and named to the Omaha World-Herald second team all-state. In basketball she received 2022 honorable mentions from both the LJS and OWH. She was Marian’s 2021 and 2022 defensive player of the year. She is a member of National Honor Society and the Running Club.

Mia Nelson ’22 will be playing soccer at the Savannah College of Art and Design, where she plans to study animation and business management. Mia has earned letters in soccer from both Marian and Lakenheath High School in England, where she lived for two years. Mia has been involved in a variety of clubs and activities including National Honor Society, Art Club, Spanish Club, Kindness Club and Coffee Club. She has  volunteered with Open Door Mission, Vacation Bible School and Kickball with the Disabled.

Bella Washington ’22 will be playing soccer at Iowa Western Community College, where she plans to study psychology. Bella has earned two letters in soccer. She is a member of the worship choir and a core team leader with IDEAS Club