Surprise Day throughout the years: The evolution of a Marian tradition

Surprise Day began on a cold dreary day in winter during the mid 1970s. The very first Surprise Day began when Student Board (STUBO) members and their moderator Sr. Ginny Silvestri, O.S.M, told everyone to head to the gym for a surprise over the loudspeaker. Students spent the last two hours of the school day watching “Wait Until Dark” starring Audrey Hepburn and Alan Arkin. Students sat on the floor of the west gym and ate popcorn with their classmates.

“The first ever Surprise Day we planned was a success, and the best part was being able to completely surprise the entire school,” Sr. Ginny said.

Although the student body had a wonderful time, some faculty members disliked the exhilarating surprise because it interrupted class time.

“We did get permission from the principal to host the first Surprise Day, but the idea was created entirely by the STUBO members,” Sr. Ginny said. Because of those STUBO members, Surprise Day became a tradition, and it has evolved into the huge phenomenon it is today. 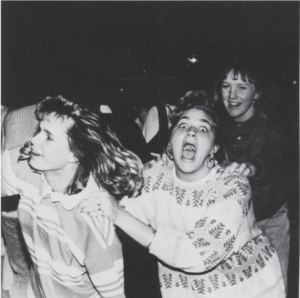 In the 1980s, Surprise Day evolved into a half-day of fun. Student Board President. Christina Koliopoulos Piperis ’87 and the entire STUBO invited a band from Creighton Prep to perform at Surprise Day. “Even the Prep students were able to keep the secret,” Piperis said. The band was a hit, and they made the surprise even bigger since there was not a DJ. Piperis and her fellow STUBO members were successful in pulling off the surprise every year she was on STUBO. “I was able to fit 800 popcorn balls in the trunk of my car without my carpool noticing,” Piperis said.

As Surprise Day evolved year after year, the cost became more expensive. By the time Koesters became the moderator of Student Board, Surprise Day cost several thousands of dollars raised from annual school events such as the Welcome Dance. Some of the events Koesters planned included live band performances, dance parties and a movie room.

In 1994, English teacher Ms. Susie Sisson became the moderator of STUBO. She introduced inflatables and some other activities and additions that were planned. This included a cotton candy machine and obstacle courses where each class would compete against each other in a pep rally setting in order to kick off Surprise Day.

The activities for Surprise Day differ every year. “One year, there was a hypnotist that performed in front of the whole school … they had a group of students volunteer to be hypnotized, and the hypnotist made them think their shoes were telephones,” English teacher Mrs. Alee Cotton ’05 said. There was also a band performing in the west gym, inflatables, crafts and face painting. Her experiences are very similar to how the day is now.

“Students would always press Student Board members into revealing the date, and the best part was finally getting the break that you didn’t know was coming,” Cotton said.

English teacher Ms. Megan Piernicky became the moderator of STUBO in 2012. She introduced puppies and included Guitar Hero and Dance Dance Revolution that were shown on big screen TVs.

“I remember we did have one setback when there was a snow day on the day Surprise Day was planned. When word got out that Surprise Day was supposed to be on that snow day, some worried that it was canceled that year. We used that to our advantage which made the surprise more fun,” Piernicky said. 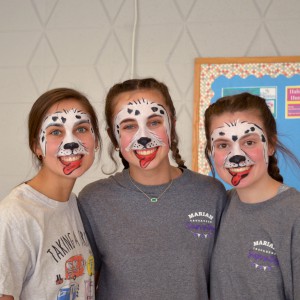 Each year, there are plenty of new events for the students to enjoy. The petting zoo was a huge hit in 2021 when many of the activities were outdoors because of social distancing regulations inside the building. Some of the animals included were rabbits, alpacas and goats.

“During my sophomore year, my chemistry teacher joked about it being Surprise Day because he mentioned that he saw a petting zoo being put in the gym. I could not believe it when my students were telling me they saw horse trailers with animals last year before the Surprise Day announcement happened,” math teacher Ms. Megan Han ’13 said. In addition, there were also churro and ice cream trucks along with bounce houses both inside and outside the school last spring.

“Planning Surprise Day as the current head of STUBO can be difficult since few people know when it is, but it is no more stressful than any other planned school event overall,” current STUBO co-moderator, Ms. Jessica Abel said.

Although Surprise Day gets larger every year, the experiences involved with the event remain the same: unforgettable and exciting. “My favorite thing about Surprise Day was seeing everyone’s excitement when the announcement was made and being a part of such a fun tradition at an all-girl school,” Piperis said.