The History of Field Day: Marian’s most beloved tradtion

School field days are springtime tradition – three-legged races, sack races and kickball tournaments are standard field day fare. At Marian, Field Day is unlike anything you’ve ever seen before – it’s on a whole different level. You have to see it to believe it.

Hundreds of teenage girls parading down to Benson Park dressed as Pooh bears or performing a parody of Lady Gaga’s “Bad Romance” in the name of their education is certainly not a part of the curriculum at most high schools. For more than 65 years, Marian has held Field Day and each year brings new challenges, new passion and new chapters to the Marian story.

A New Way of Educating

The first Field Day was held in the spring of 1957. In these early days, the event looked a bit more like how most people expect a “field day” to look. Classes competed in field events like three-legged races and a class vs. class softball tournament. Students’ main concern was not winning as much as it was enjoying the spring day and spending time with their friends. 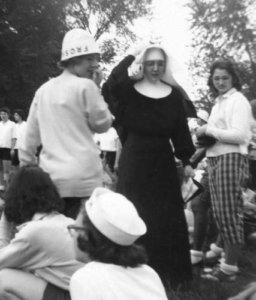 Classes accumulated points for their performance in field events, still keeping true to the traditional idea of a “field day.” They were also scored for elements like a cheerleading squad, the decorations in their class hallways, the complexity of their demonstration and their overall unity. Field Day was growing and beginning to embody the lessons alumnae today know it teaches.

“The whole process teaches everybody how to work together in different ways,” said Betsy Ronspies ’11. “It really makes you be creative and get outside of the box. You may have to work with someone you maybe never would have crossed paths with otherwise. It’s a learning experience in team work and how good communication really pays off.”

“Field Day teaches life-long skills, and if they’re not taught early, they’re never taught. These skills translate into careers… students are taking away more than something like learning arithmetic,” said Shaela Cavel Wepfer ’92.

As the years went on, focus shifted from the field events to the hall decorations, costumes, floats and demonstrations. Students were putting hours of work into their classes’ presentations, say Sara Sheeren McKeon ’81 and Mary Kay Leatherman ’81.

“It seemed like for weeks before Field Day students would be practicing cheerleading after school and working on floats at night,” Leatherman said.

Most of this work came to be contained in the week leading up to Field Day that students know today as Field Week. Students began to attend their classes in the mornings and spend the afternoons working in committees dedicated to each different category that makes up a Field Day presentation. The tradition has since expanded far beyond just one week and far outside walking distance of Marian’s campus, though.

In 1985, Judges’ Booklet, a diorama accompanied by a humorous skit, was added to the presentation as way of explaining a class’s theme in greater depth to the judges. Floats eventually became mascots that were to be incorporated into a class’s demonstration. In 2007, hall decorations became more condensed wall decorations that are presented side by side in Marian’s east gym.

Even with these changes and additions, Sallie Delgado Peters ’00 maintains that these committees have always highlighted Marian students’ drive and talents.

“Whether you’re a very talented artist that can work on Walls to bring a concept alive for your class or if you have an engineering mind you can use to create a mascot that is interactive or you can write clever lyrics… you’ve got all these talents and strengths that are encompassed in each class,” said Peters. “There are so many different ways you can shine with Field Day.”

Every moment of the school year is now a step toward Field Day. Students work all year fundraising for events like Walk-A-Thon, avoiding disciplinary points and accumulating BOSS points by attending events to show their Marian spirit. These totals all determine the order in which classes will choose their themes and colors on Color Block day.

After one too many Field Days crowded into Marian’s gyms because of poor weather conditions, Field Day was moved from Benson Park to DJ Sokol Arena on Creighton’s campus in 2010. Attendance increased so rapidly that it was moved again in 2017 to UNO’s Baxter Arena to accommodate the large capacity of students, teachers, staff, family and alumnae. The event is now streamed on the Marian website as well so members of the Marian community can celebrate wherever they are.

“There’s a lot more to Field Day now,” said Audra Neppl Cavanaugh ’90. “You can walk into Baxter and buy signs with each classes colors. You can find videos of demonstrations on YouTube… The students do so much hard work, and it gets everyone excited about Marian.”

No matter how much Field Day has changed from 1957 to 1981 to 2000 to 2020, any Marian student, alumna, family member, teacher, staff member or administrator can try and explain the ins and outs of Field Day, but the consensus seems to be that it is and has always been something that must be seen to be believed.

“Every school has their traditions, but this is one of the most unique, time-honored traditions that any school can have,” said Wepfer.

Today student’s social media feeds were flooded with the same Field Day spirit that has flooded Marian’s halls since 1957. Students spend hours preparing for Field Day, whether it be filming TikToks, building a mascot, baking intricate treats or performing a demonstration. The unexpected lessons students learn from these activities are what stick with them and are what makes Field Day so special, McKeon says.

“You gain an appreciation of Field Day after you’ve been away from it,” McKeon said. “In the moment, it can be stressful with deadlines and so many people working together. Now, I have great memories from that time, and they only get better as time goes on… It all becomes a part of who you are.”