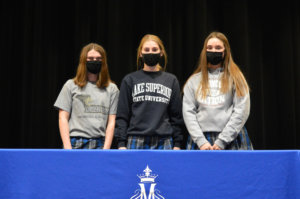 Marian High School is proud to announce that three Crusader student-athletes signed letters of intent at a recognition ceremony held Feb. 10. While they have displayed stellar performances on the court and in the pool, their time spent in the classroom and community is just as impressive.

Jessica Brusnahan ’21 will join the swimming program at Lindenwood University, where she is planning to study environmental science. Jessica is the daughter of Melissa and Tim Brusnahan. In 2017, she was in the Midwestern Swimming Top 8 tabulation in the 100 and 200 fly at the short and long course championships. Jessica has been part of the Metro Conference All Academic Team in both 2020 and 2021. Out of the pool, she is a member of numerous honors societies, a leader in both Sustainability Club and Yoga Club, news page editor for The Network newspaper and a lector at Mass.

Cece Hacker ’21 is signing to play basketball at Lake Superior State University where she plans to major in business with a minor in criminal justice. Cece is the daughter of Scott and Carroll Militti Hacker ’88. She is a four-year varsity basketball player for basketball and and a two-year varsity soccer player.

Sophie Stevens ’21 is signing to play volleyball at Hastings College, where she plans to study on the pre-dentistry track. Sophie is daughter of Jordan and Karen Stevens. Off the court, Sophie is the features page editor for The Network newspaper and a member of Campus Ministry.