Wander Puzzle Co. Owner is No Stranger to Stepping Out of the Box

This story originally published in the Women in Business issue of B2B Magazine, December 2020.

“My hope for women is they get over fear and self-doubt to release themselves out into the world. The world needs more feminine-driven ideas,” Omaha native and Wander Puzzle Co. owner Lindsey Fauss Simmonds ’97 said.

Simmonds is rounding out her first year of entrepreneurship in the puzzle industry after successfully recognizing gaps in market offerings and following intuitive proddings.

Wander puzzles are unique for their vibrant, boutique-y designs of social unity and female empowerment, offering users “peace by piece.”

Simmonds started working on puzzles as a hobby in 2018. By day, she worked with global leaders on women’s reproductive health care and advancement on large projects. Puzzles provided solace after stressful days at work. “The beautiful thing about a puzzle is it has one solution. Your brain creates a safe space, which is why doing one feels so good,” Simmonds said.

After two years, she ran out of puzzle designs that she enjoyed assembling and wondered, “How difficult is it to make a puzzle?” Simmonds had never launched into a solo business venture before.

She researched the market to find it was highly saturated with large manufacturers pumping out huge sales volumes. “I was floored at minimum order quantities,” Simmonds said. What was lacking was unique “art” that spoke to her. Her intuition kept prodding her, saying, “Do it. Do it.” In summer 2019, she decided to launch a puzzle business.

Inspired by job creation models she witnessed doing international work, she connected with two international artists online to present her business idea: unique, visually appealing puzzles that had deep meanings to users, essentially “to keep creating art in the world.” They “took a leap of faith in her” and she established a contract with a manufacturer in Shenzhen, China.

No sooner had the business launched than families were staying inside for days, seeking entertainment. By March, “everyone was buying puzzles. I was selling over 100 a day,” Simmonds recalled.

Real Simple magazine featured the puzzles in an article in March.

Locally, news continued to spread about Wander. Local shop owner Vanessa Heilig Nkwocha of Everbloom Floral carries the puzzles. She recalled, “Just as fast as we’d get them shipped in, they would sell out. Lindsey was doing a lot of things right. She is fun and whimsical, collaborating with a spectrum of artists. She is responsive to customers.” 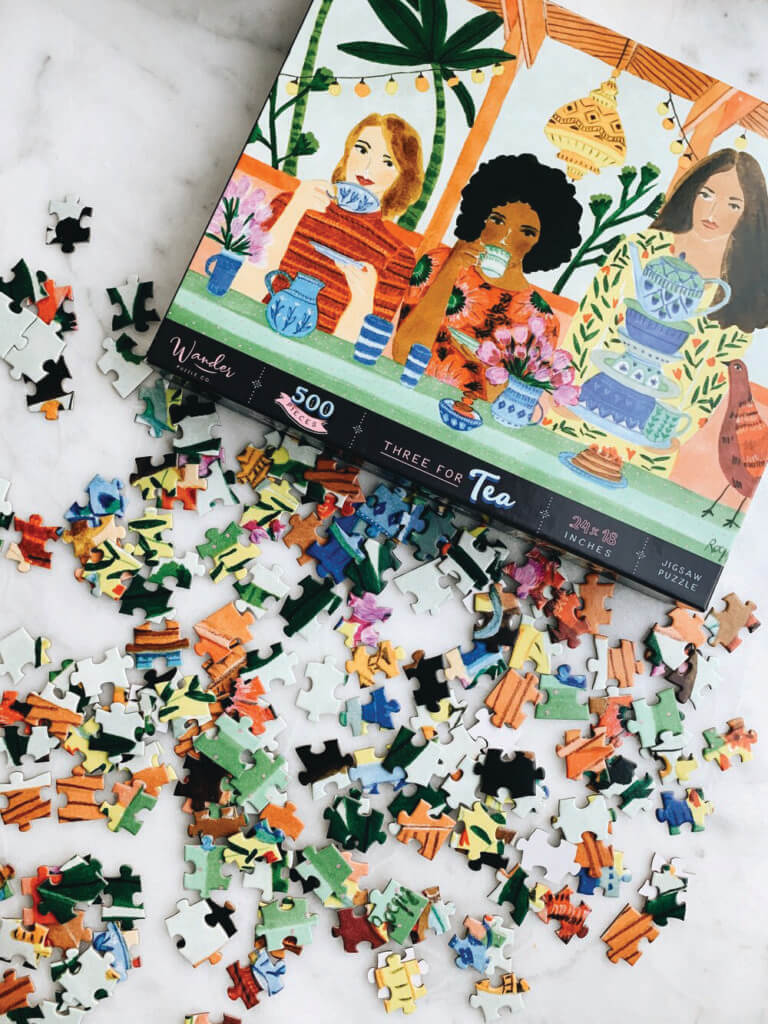 By April, Simmonds sold out of her puzzles. She accepted 1,000 preorders for restock in June.

Glamour magazine featured the puzzles in an April article and HGTV featured them in an April blog post. Simmonds was pleasantly surprised by all three magazines’ content inclusion.

One of Simmonds’ favorite parts of managing the company is fostering a connection between women. She noted there are “girlfriends sending ‘Roadtrip’ across the country when they can’t travel together in person” and “mothers sending ‘The Movement’ to daughters, saying things like ‘This is your generation. We support you. Go get it, girl.’”

Wander sells 500 and 1,000-piece puzzles, retailing for $27.95. The company works with seven international female artists from Brazil to Turkey and plans to be in five national retailers by the end of 2020.

Simmonds’ goal by 2023 is to hold 1% of the puzzle market in the U.S., which would be about $7 million in sales annually. “It is a tough market in the sense that there are really big companies competing, but it’s awesome because I have this small, unique niche. The art that I’m curating is boutique-y and niche.”

“I hope that the images in Wander puzzles inspire people, and that puzzling provides them with a feeling of satisfaction. Peace by piece,” Simmonds said.

Simmonds also hopes to connect with female entrepreneurs to create a network in Omaha. “The world needs more feminine-driven ideas. The world needs it sorely.”

Megan Keyser ’16 graduated from the University of Nebraska Lincoln in May 2020 with a degree in marketing and business management and is currently working as a professional services recruiter for Aerotek in Omaha. She is also a freelance writer, photographer and blogger.